A weekly newsletter of the top articles that inspire our work, as well as info on August jobs, events, blog posts, and podcasts

What’s wrong with the RACI model?

Why RACI doesn’t work, and the decision-making models we should use instead.

In my work with leaders and organizations, I often find the RACI model at the heart of their decision-making processes. And for good reason. RACI (Responsible, Accountable, Consulted, Informed) charts are satisfying to write, and popular in big organizations as they provide an illusion of safety and control.

The problem? They’re entirely disconnected from the realities of modern decision-making.

The RACI model is a hangover from the predictable, command-and-control work environments of yesteryear, when projects used waterfall planning with specific milestones that could be predicted in advance.

In today’s VUCA (Volatility, Uncertainty, Complexity, Ambiguity) world, where solutions are unpredictable and can only be found by rapid testing and experimentation, the inadequacy of RACI charts quickly becomes apparent.

What are the positives of RACI?

Before we throw RACIs out altogether, let’s pull the baby from the bathwater. Here are a couple positives we can bring into the future:

1. RACI defines who’s in charge of the final decision.

A good RACI chart defines where authority lives. That’s a big improvement on many organizations, where decisions languish in a sea of alignment meetings, implicit power and systemic inequity.

By making authority explicit, the decision becomes both inclusive and editable. Inclusivity increases the psychological safety of all team members to make proposals and take actions. Editability makes the distribution of authority responsive to the changing circumstances of the project.

2. RACI allows us to move decision ownership closer to the work itself.

In the visual below (adapted from work by August co-founder Clay Parker Jones), we can see that situation A is intensely bureaucratic and bottlenecked, with the CEO making decisions she clearly shouldn’t. In situation D, the person closest to the work decides, presumably because they have the most data about the situation and work in a high-trust environment. 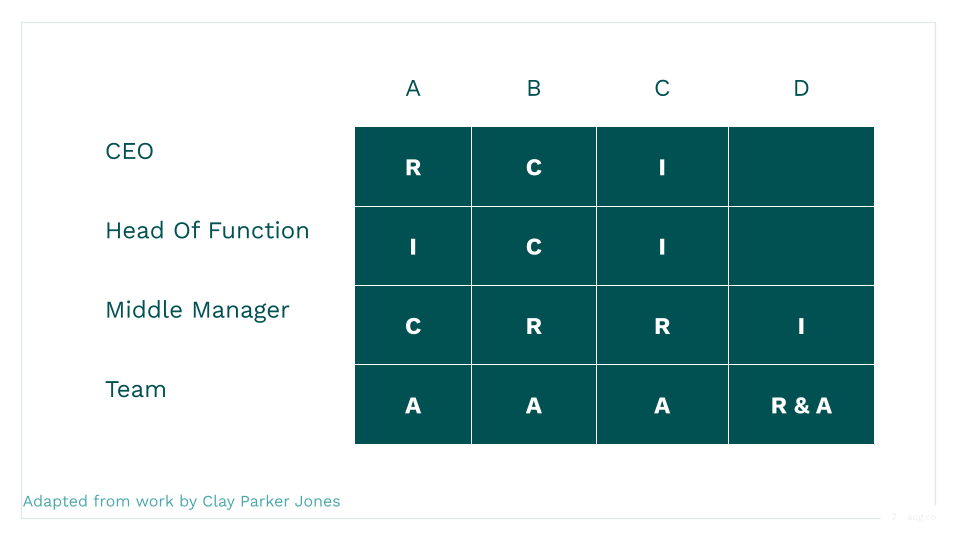 In my work with leaders, I ask them to map out where decisions currently live. I then challenge them to pick one area of authority and move it one level closer to the work.

My rule of thumb for this exercise: If the amount of decision-making power you are distributing makes you a little bit uncomfortable, that’s probably the right amount.

RACI’s first downfall is its assumption that employees need clear and detailed directions before they can make any decision.

In fact, a typical RACI chart tells employees that they can only make decisions if they have been told that they can.  This places them at the far right of the polarity in the graphic below. 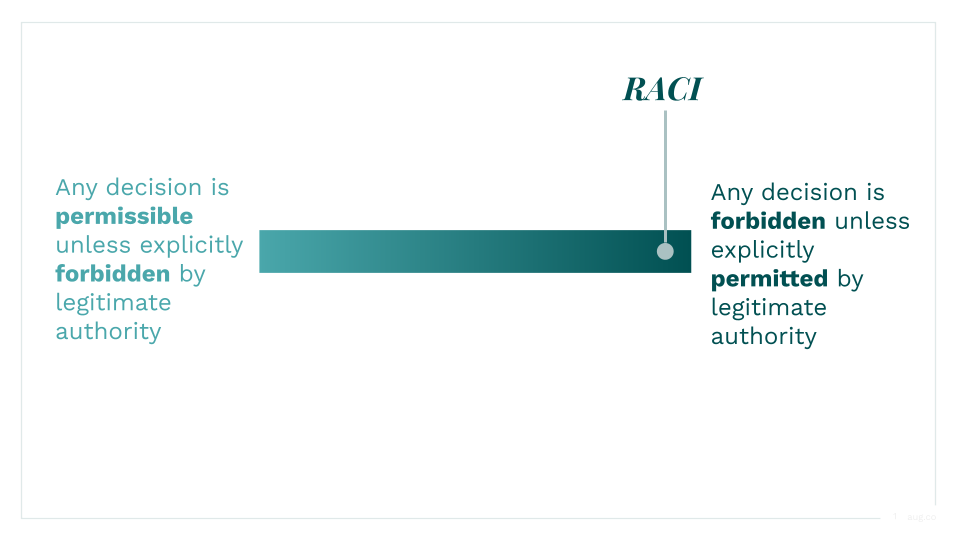 If we give fewer guidelines and trust employees to use good judgment, they will make wise decisions in the face of ambiguity – and we’ll get better results, faster.

My biggest issue with RACI charts is that they assume that all decisions will be made the same way, i.e. by getting everyone with a “C” or “R” next to their name to say yes.

This is hard! It can require multiple alignment meetings and proposal revisions, and can result in an idea that’s watered down in order to get everyone’s buy-in.

This can be useful in high-validity situations, or for irreversible decisions where perfection is required. But in the vast majority of cases, an agile and adaptable decision is far more valuable than a perfect one.

One approach is to give decision-making power to the team or individual executing the work. This keeps things moving, but can make strategic unity difficult, as individuals lacking a common direction may take lots of action, although towards the wrong goals.

On the other end of the spectrum is autocracy or “top-down” decision making. This approach gives a unified direction, but impedes agility, inclusivity and innovation. Additionally, extreme autocratic leadership can disengage and disincentivize other employees, causing attrition.

There are many other decision-making methods between these two extremes, including democracy, golden vote, and (my preference) consent-based decision making (aka “Safe To Try”), which allows for smart failure and an experimental, test-and-learn approach. 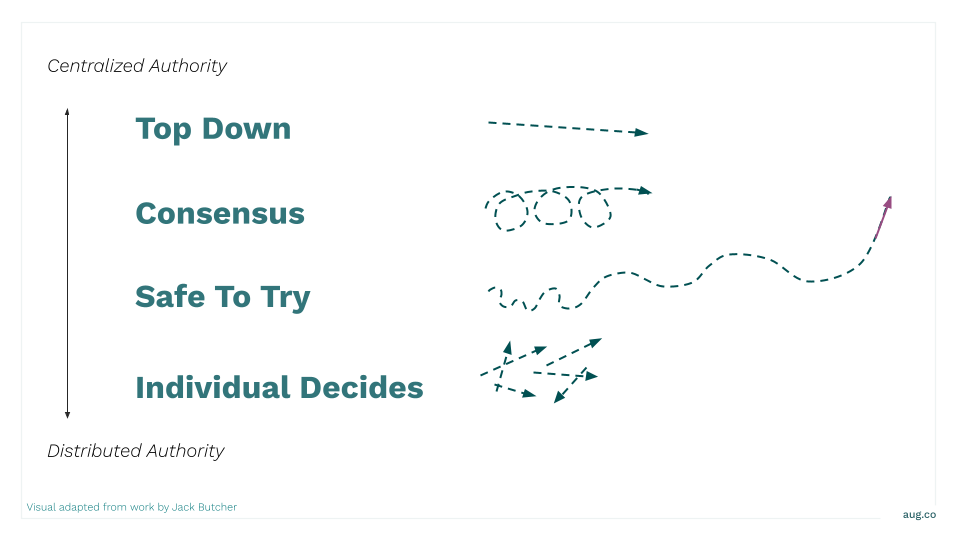 Each decision-making method has its pros and cons. Here are four questions that can help you decide which is the right method for your given situation.

1. Is it possible to know the right answer by talking about it?

Will one more consultation get us closer to the right answer? Or is it better that we take a progress-over-perfection mindset?

2. How soon could the situation change?

Will the time we lose trying to make a better decision be worth the incremental gains?

3. What is the cost of not making a decision?

What happens if we do nothing for another week? Will we lose ground to established competitors or startups moving with greater speed and agility?

4. Are the risks of making a wrong decision easily reversible?

Can we walk this decision back if we realize we’ve gone wrong? Or will we be locked into a decision that causes our business harm?

The work of the modern consultative leader is not necessarily making the decision itself, but deciding who decides, and how they do it. In other words, their role is to design the organization that gets the work done.

This requires a profound mindset shift, and some letting go of the subject-matter expertise that got us to our leadership position in the first place.

But this personal transition is at the heart of organizational change. A RACI mindset will prevent your organization from thriving in a VUCA world. Letting go starts with the individual leader, who must release some control in order to unleash the full potential of her teams.

From Great Workshops to Greater Impact

Enjoy this post? Get updates delivered straight to your inbox.

No spam, no fluff — just one email every week with the latest posts.

August is a Certified B Corporation®. This means that beyond the impact we aim to make for our clients, we also work to make a positive impact for our employees, suppliers, community, and the environments. Read our B CorpTM assessment.